Consumer products are increasingly being formulated with chemicals that pose serious health risks to humans who come into contact with them. There are several major reasons why harmful chemicals found in consumer products have a negative ripple effect on human consumption, as opposed to other methods of contaminant exposure, and why it is crucial to have a platform like Sustainable Life App, that addresses such an important, and potentially negative, factor of human consumption - the Impact on Human Health.

In 2019, scientists at the University of California, Santa Barbara, Li and Suh, conducted and published a review of common contaminants in consumer products and their effect on human health. They summarized 6 unique issues associated with the use of harmful chemicals in consumer products, as follows:

1. Consumer products can reach a large number of people within a short time frame due to the fast-evolving nature of product distribution systems.

2. Consumer products come into contact, often closely, with humans frequently, and therefore the exposure frequency and intensity through consumer products is higher than many other forms of contamination. History is replete with examples of toxic consumer products that lead to diseases, toxic poisoning and many deaths of people that came into contact with these products closely. As an example, women dating from the Roman Empire, to Queen Elizabeth I herself, famously used a mixture of lead and vinegar to whiten their complexion, a product that led to skin discolouration, hair loss and rotten teeth over prolonged absorption through skin. Not only that, but women in the 19th century United States were encouraged to consume arsenic pills - which are poisonous to humans - to even out their complexion3. This area is important to study, so we can prevent things like this from happening before they impact people on a wide scale. Although consumers may not be putting lead on their faces or consuming arsenic pills today, there are still health risks to current day products which may already be known, or which may not have been discovered yet.

3. The co-exposure of multiple chemicals in the same products can have combined negative effects on human health.

4. The variable effects of chemicals depending on the exposure circumstances, is a potentially alarming issue associated with consumer product usage.

5. A lot of harmful consumer products were formulated before the true negative health effects of the product were known and even after their harmful effects are understood and outlawed, it is difficult to take products out of common use because of the depth of product distribution and the precise details and loopholes in the regulations. One well-known example of this is the use of lead in household and children’s products, as well as wall paint - paint was formulated with up to 50% lead prior to the 1950s due to its role in helping paint to dry quicker, wear nicer, and create more vibrant paint colours. Although the devastating effects of lead on human health, such as toxicity, reduction of red blood cell production, neurobehavioral and cognitive defects in children and fetuses to name a few, have been known for hundreds of years, and there is evidence that lead toxicity was understood even by ancient civilizations, it was not until 1976, when Canada’s Hazardous Products Act limited the amount of lead that could be contained in paint4. Following 2002, Canadian law reduced the acceptable percentage of lead in paint to under 0.06%, however, even small proportions of lead can impede intellectual and behavioural development, therefore there is still room for further action to be taken4. It is important to note that Canada’s Hazardous Products Act only affects new paints being sold. Houses built before the 1960s are expected to have lead paint on their walls, which could still be impacting human health for people living in those buildings today. In this case, as long as the paint is not chipping or in danger of being ingested or breathed in, especially by children, it is best to cover the painted walls with wallpaper, wallboard or panelling. Although painting over old painted walls is also an option, it is not as safe as wallpapers or panelling because of the ease with which the surface paint can chip. If, however, the paint is chipping, flaking or is in reach of children who may chew on it, it is best to remove the paint following very specific government guidelines5.

Consumer products formulated with potentially harmful chemicals may persist, unchanged, due to their ease of availability, monetary affordability, or the role of the chemical as a stabilizing effect on the product, until scientific research shows its adverse effects on human health and even then, laws may not strictly inhibit the use of these harmful chemicals6. Similar to other developed countries, such as the United States and those in the European Union, Canada has a law that controls the composition of consumer products sold in the country, namely the Canada Consumer Product Safety Act, which came into effect merely in 20117. The Canadian Act enforces the documentation for the production and preparation of consumer products in accordance with product-specific health requirements, in addition to enforcing prohibitions for products that are harmful to humans or do not comply with product-specific safety regulations. This Act further grants Health Canada the authority to enforce the recall of harmful products in the market.

Product-specific health requirements, however, may not be exhaustive in eliminating all known harmful chemicals from consumer products, or they may leave the disclosure of the exact effects of certain unknown products to the discretion of those producing the product, lending room for more comprehensive consumer product safety regulations. The cause for production of nontoxic consumer products is also helped along by advocacy and research done by independent organizations such as Environmental Defence Canada, as well as through an increase in consumer demand of sustainable products, which will occur through platforms Sustainable Life App extensively vetting companies to ensure their products are safe for human consumption and connecting eco-conscious consumers to these sustainable brands and businesses. 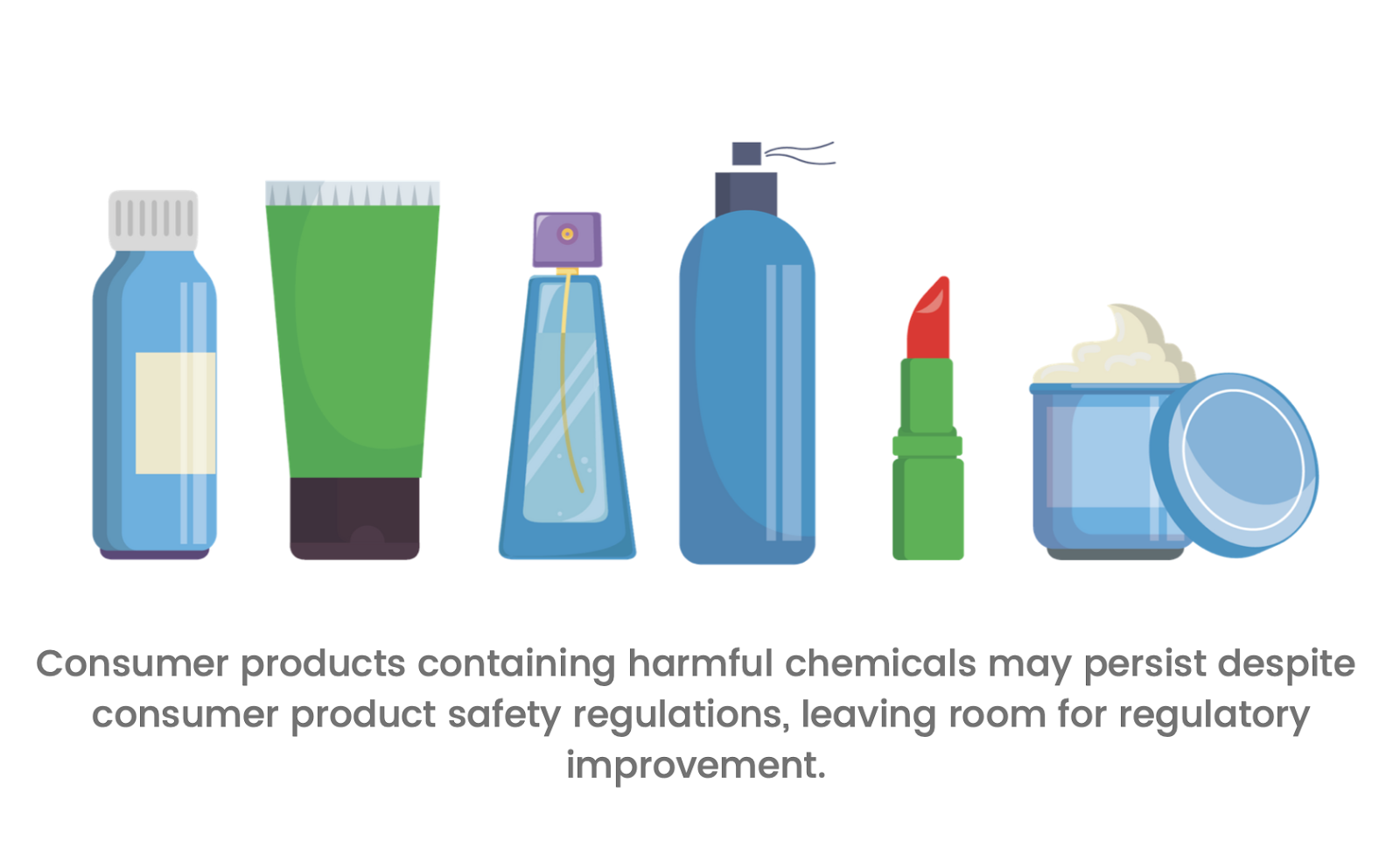 The California Safe Drinking Water and Toxic Enforcement Act of 1986, also known as Proposition 65, is a world-renowned example of an expansive regulation ensuring the health and safety of consumers8. This Act requires the Governor of California to maintain and update a list of chemicals found to cause cancer, birth defects, or reproductive toxicity every year, and requires businesses with greater than ten employees to provide warnings to consumers about significant exposure to any of the harmful chemicals listed under this proposition8. Not only does this increase consumption of products that are better for health, but it also leads to a chain reaction whereby companies selling their products in California usually list the chemicals on the same products sold elsewhere as well. Although this is a comprehensive law for protection of consumers from cancer and reproductive toxicity, there is still room to outlaw or disclose other chemicals in consumer products, which may not lead to cancer of reproductive toxicity per se but are nevertheless harmful to consumers. In order to formulate extensive regulations and laws that effectively eliminate or reduce adverse human health implications of consumer products, it must first be understood the chemicals that are harmful to humans, and the exposure pathways through which they come into contact with human beings. 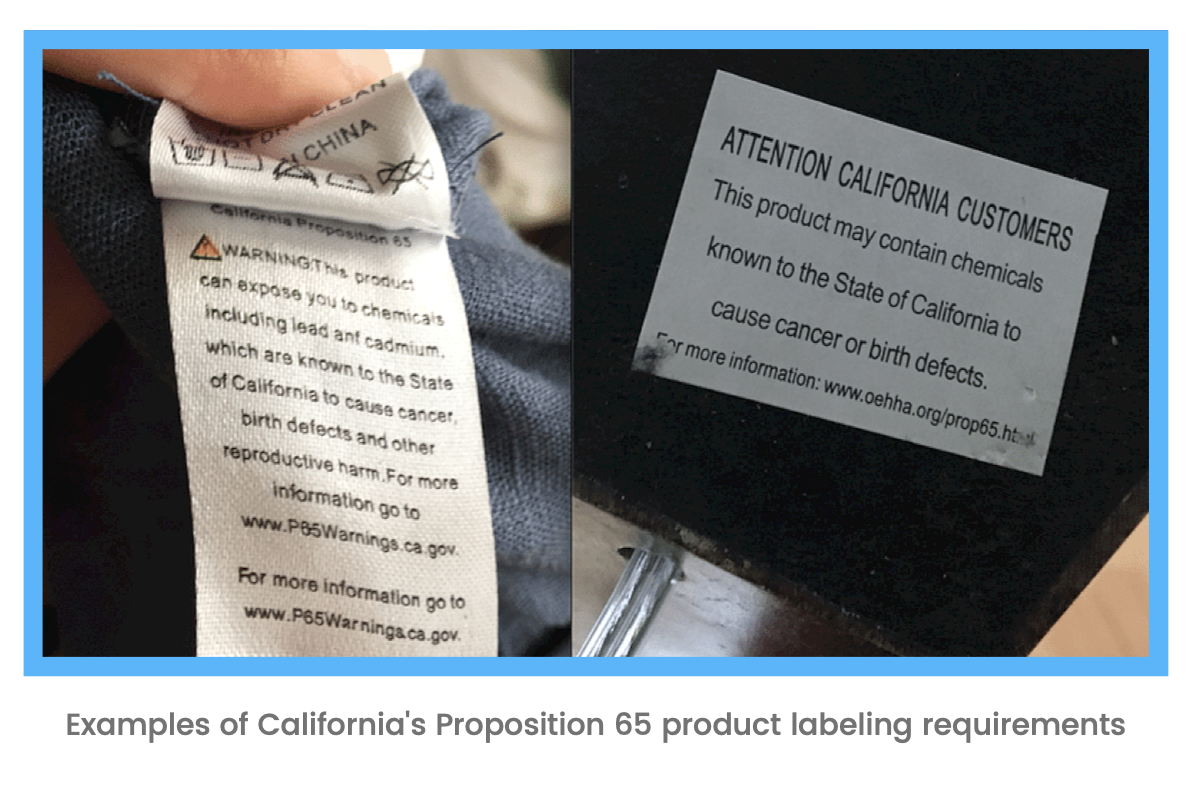 A literature review performed by researchers in the United States looked over 342 articles, covering 202 unique chemicals to extract information of the uses, product application, and exposure pathways for the most commonly used chemicals in consumer products. Their research found that the most-frequently reported chemicals could be grouped as flame retardants in furniture or electronics, followed by plasticizers in products such as food containers, i.e. bread bags, tuna cans etc., and then UV absorbents in some sunscreens.

In terms of chemicals, the most commonly reported chemicals were phthalates, bisphenol-A (BPA) and Polybrominated diphenyl ethers (PDA) respectively. This research paper further studied exposure pathways to elucidate the ways in which these chemicals come into contact with humans most frequently. Nearly half of the assessed reports found that direct contact, leading to dermal absorption, for example, was the most common exposure pathway, followed by dust through inhalation, then food and beverage consumption (including unintentional or indirect ingestion of microplastics and chemicals in food packaging), then fugitive emission to air, and lastly aerosol emission1.

The reason why it is so crucial and urgent to increase awareness for, and eliminate harmful chemicals from consumer products is that without realizing, nearly all processed products that consumers come into close contact with every day, from clothes and cosmetics, to furniture and food containers, may contain chemicals that can lead to a virtually endless list of diseases and defects - cancer, reproductive defects, hormone irregularities, epigenetic modulation and diabetes among them6,9. Such a platform, one that addresses and informs consumers about the chemical composition of products as a sustainability factor, and presents an exhaustive factual report on the impact of all listed products on human health, is currently missing in the market. This is a big issue, especially when consumer products are known to have highly adverse effects on human health, some of which are not well known by the consumers purchasing these products.