Consumer products can have a major and lasting impact on the environment from the process of sourcing and production all the way to final consumption and disposal due to a few major factors. We recommend consuming products from businesses and brands that consider and have a plan in place that represent a circular economy framework. 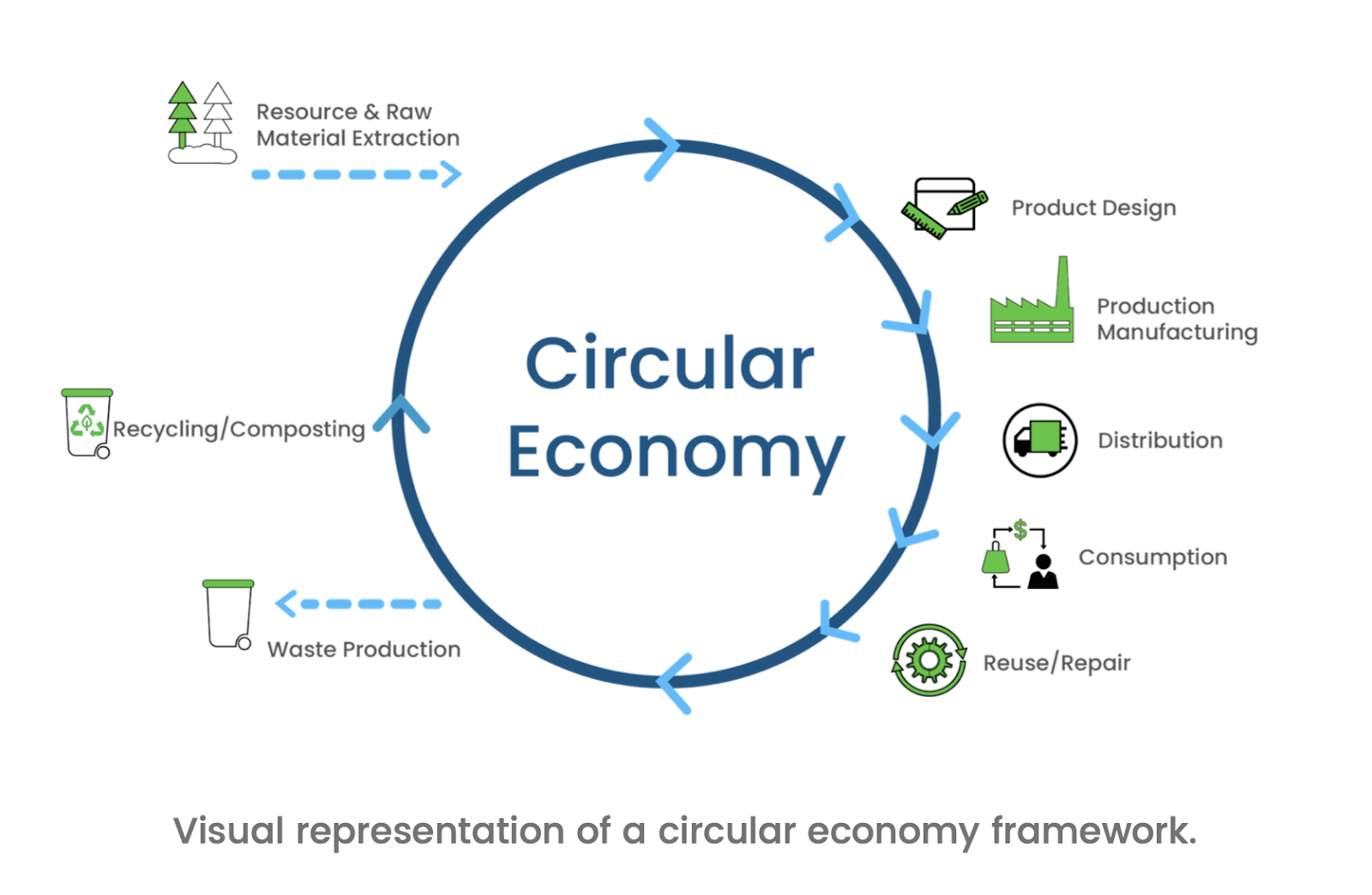 This environmental impact of consumerism, which is historically evident dating back to the late prehistoric times, ranging from the relatively smaller environmental impact of weapon and utensil production during the Bronze Age, to wide scale farming following the Agricultural Revolution, saw an unprecedented, exponential growth with the advent of the industrial revolution10. With the industrial revolution, marked by fast-paced technological and industrial growth during the 1700s-1800s, land deterioration, deforestation and air and water pollution - and most noticeably, greenhouse gas emissions - increased at an alarming rate as a byproduct of mass consumer product manufacturing. This was harmful to the environment and continues to be harmful today with an exponentially growing population and its respective growing consumer needs11. 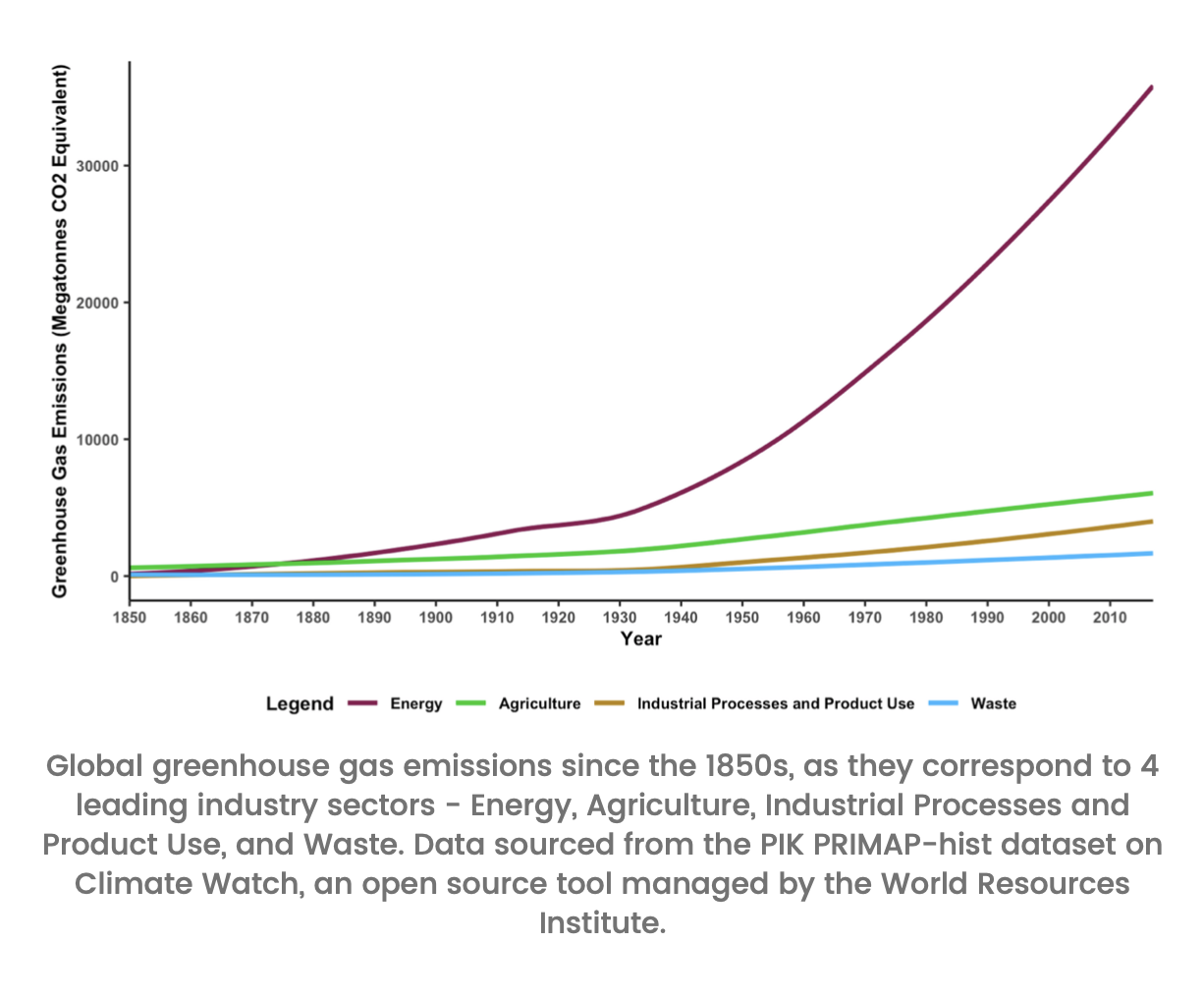 This graph shows global greenhouse gas emissions since the 1850s, as they correspond to 4 leading industry sectors - Energy, Agriculture, Industrial Processes and Product Use, and Waste. Although all sectors have seen a definitive increase in their greenhouse gas emissions following the industrial revolution, this change is most stark in the Energy sector. Despite the other sectors seeing relatively less increase in greenhouse gas emissions, compared to the Energy sector, the scale on which these emissions are measured is massive - tens of thousands of Megatonnes of carbon dioxide equivalent - therefore each sector has seen a tremendous increase in its emissions over the past 2 centuries. This data is sourced from Climate Watch, which is an open-source tool managed by the World Resources Institute. Our analyses are based on the PIK PRIMAP-hist dataset, which uses “countries’ official inventories reported to the UNFCCC” as a basis for its data, and “fills in gaps data from other sources, including CDIAC, Emissions Database for Global Atmospheric Research (EDGAR), and FAO”. This tremendous tool can be accessed at the Climate Watch website (climatewatchdata.org), where users can toggle through datasets and variables to see the various trends in greenhouse gas emission for themselves.

In the current unprecedented times of global change, the environmental impact of consumer products is important to understand.  It is important to minimize or eliminate the negative environmental impact of the products that we invest in because the chain of production and consumption contributes substantially to environmental deterioration, climate, and global change. One example is that of greenhouse gas emissions. In 2018, oil and gas, followed by transport, were the leading contributors to Canada’s greenhouse gas emissions12. While emissions from economic sectors like Heavy Industry - which includes emissions from processes such as mining, refining, chemicals, and fertilizers - and Agriculture were relatively smaller, they still amounted to a total of 151 Megatonnes of carbon dioxide equivalent in 2018. To put it into perspective, driving 4500 km emits approximately 1 tonne of greenhouse gases in Canada13. If one does the math, 151 Megatonnes is equal to the emissions from driving 679,500,000,000 km. That is equal to driving all the way from Toronto to Vancouver and back again 77,888,583 times in a year.

Although not all of the emissions from each of these industry sectors are from consumer products, it is safe to assume that a large chunk of these emissions originated from the production and consumption chain of products, since the Canadian consumer product industry accounts for nearly one-third of Canada’s Gross Domestic Product (GDP)14. Agriculture and heavy industry are just examples of economic sectors involved in producing and distributing consumer products, which brings to clarity the critical significance of each consumption choice that we make. This is where sustainable consumption must become the new norm for a future where the planet can sustain itself and the human population.

Apart from greenhouse gas emissions, air and water pollution are additional important consequences of traditional consumerism. This is important to address not only on an environmental basis, but also on a legislative basis because the true environmental impact of all molecules in products may not be known, though research is continuing to unveil the effects of more and more product ingredients. 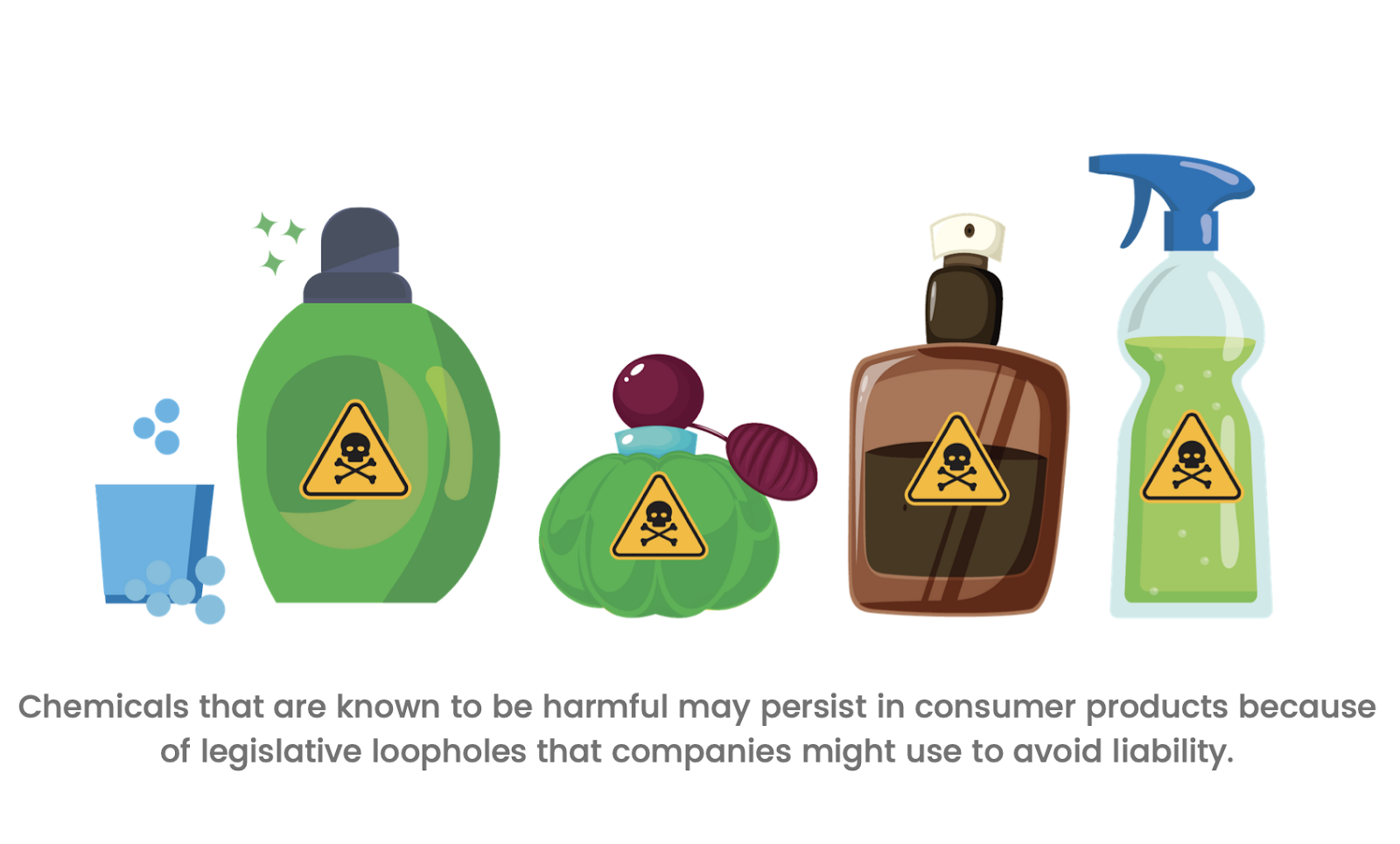 Perhaps more importantly, however, even with known chemicals, product manufacturers may not be held liable for reporting every ingredient in their product, allowing harmful chemicals to escape into the environment without the knowledge of the consumer, or the respective government agency. A study conducted by Steineman in 2009 analyzed the composition of personal and house-related fragranced consumer products in the United States, since no law forces manufacturers to list the complete chemical composition of their products or fragrances15. Within only six best-selling fragranced products, the researcher found 100 volatile organic compounds, none of which were listed on product labels. Alarmingly, 10 of these unlisted compounds were identified as toxic or hazardous under the United States law, and three were listed as Hazardous Air Pollutants - acetaldehyde, chloromethane, and 1,4-dioxane15. Chloromethane, as an example, is a classified carcinogen, exposure to which at high concentrations can not only cause neurological disorders in humans, but similar to other hazardous air pollutants, it is also known to contribute to ozone depletion, global warming, and radiative forcing among others16,17.Chloromethane was widely used in consumer products such as refrigerators over 30 years ago, and is still used to produce certain silicones, which are widely used in consumer products. 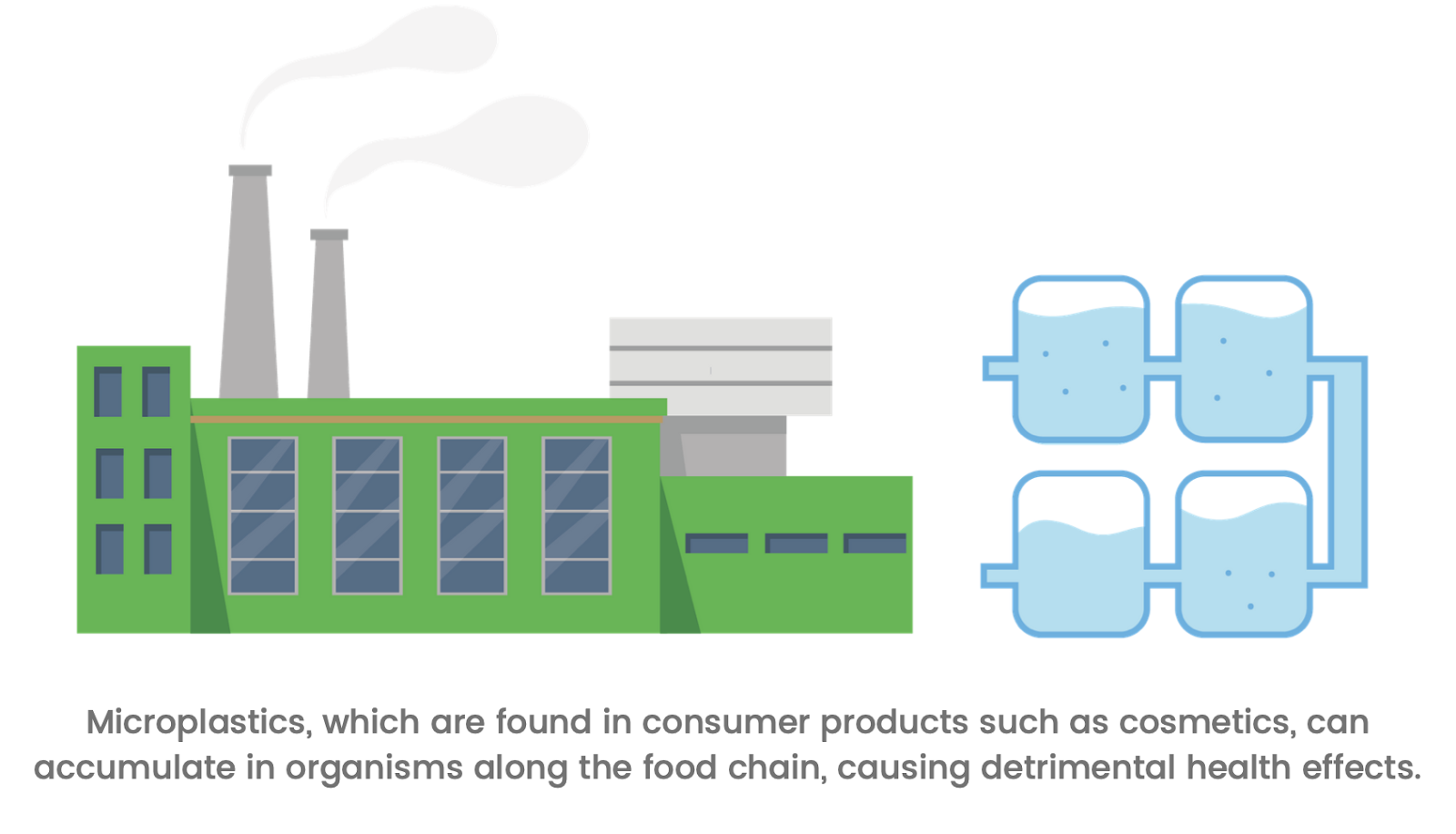 Furthermore, the effects of consumer products on water pollution are well known - from plastic straws and plastic bags that end up in the ocean, to fertilizer runoff and industrial waste disposal. Researchers at the University of Toronto conducted a systematic review of the effects of macroplastics and microplastics in natural water resources as presented by evidence in the literature18. They found that macroplastic pollution could be fatal to organisms, especially in marine environments18. Furthermore, studies have found that microplastics, which are notably found in cosmetics, among other consumer products, can lead to detrimental accumulation in organisms throughout food chains once they enter aquatic environments, which is a particularly significant issue because wastewater treatment plants may not be equipped to handle proper removal of microplastics from waste products.

Apart from microplastics, toxic heavy metals from industrial sources can also enter water bodies and lead to damage of the nervous system, blood and organs and lead to diseases similar to cancer, Alzheimer’s, Parkinson’s, and multiple sclerosis both in aquatic organisms, and in humans, if incompletely treated water reaches humans20. Water consumption and pollution is a large-scale issue in the consumer product industry that requires equally large-scale control and research. To put it on a scale, 3600 Million cubic metres of water were consumed and not returned to their original source by the manufacturing industry alone in Canada in 201321.

The list of the environmental impact of consumer products is seemingly endless. Another very important question which is coming into light more often in current times, is that of immunity. Consumer products, both industrial, and agricultural, are increasingly produced with biocides in order to have larger, cleaner-seeming yield. These biocides, however, tend to end up in terrestrial and aquatic ecosystems, and when introduced in an organism’s habitat, they lead to weakened immunity, due to the fewer interactions of organismal immune systems to the wide range of microorganisms present naturally in their environment, and also because microorganisms learn to evolve resistance to antibiotics, which then tends to make diseases more severe and unmanageable in animal, plant and human populations22. This can cause high numbers of death in a population and can even lead to chain reactions that ultimately cause organisms to be extirpated from areas where biocide pollution is prevalent.

A famous and well-documented human impact example of what was stated in the previous paragraph with regards to the environment is penicillin. Penicillin is an antibiotic whose discovery was revolutionary. However, penicillin was then given to the human population in high numbers and doses, which led to the living bacteria evolving resistance and multi-level resistance to the antibacterial properties of penicillin23. Each new generation of penicillin-like antibiotic has suffered the same fate. This is a massive issue which needs to be addressed because it is leading to the reemergence of previously cured diseases such as tuberculosis, pneumonia, and gonorrhea, which have now developed antibiotic resistance24. It is therefore crucial to avoid unnecessary antibiotic ingestion, as well as harmful or contaminated consumer products.

There are numerous environmental protection acts surrounding the manufacturing industry, and Canada is one of the most well-known countries with regards to protecting its environmental resources and regulating emissions from consumer product manufacturing processes. However, there is certainly room for improvement, particularly when it comes to the ever-continuing argument of the right of a company to patent and not disclose certain ingredients and production processes, versus the rights of consumers and regulation bodies to know the exact formulation of prepared products. This is especially critical when it could be extremely detrimental to the environment, not to mention the consumers’ own health.

In Canada, numerous laws such as the Canadian Environmental Protection Act, Canada Water Act, the Department of the Environment Act, the Species at Risk Act and the Arctic Waters Pollution Prevention Act among others, govern and regulate the consumption of natural resources during a manufacturing chain, as well as the environmental impact of consumer products. However, the issue becomes that many environmental resources, such as the air, fisheries, and wider parts of the oceans, are non-excludable open access common-pool resources, which means that they are available for use to everyone, and it is extremely difficult to provide ownership of these resources to private or public parties. As such, when no party is a beneficiary, all parties with access to these resources then have less incentive to protect the resource, and instead are able to not only freely consume as much of these resources as possible, but also excrete waste into these resources freely. However, national actions such as the carbon pricing plans, which taxes greenhouse gas emissions into the atmosphere, are a credible way of reducing unbarred usage of environmental resources, although they might be hard to implement on a large scale25.

Our app is based in Canada but countries all around the world have similar policies and every country in the world has room for improvement. Amidst this financial, industrial, and political entanglement, it is then crucial for consumers themselves to be aware of the environmental impact of the products they are consuming, and for there to be a platform like Sustainable Life App, which provides research-based factual evidence on the environmental impact of the brands selling products that are consumed by their app users.