The consumer product industry is historically wrought with human rights issues on a national and global scale. The United Nations Environment Programme (UNEP) Finance Initiative lists the human rights issues associated with each industry sector26. According to UNEP reports, the general manufacturing industry, which is far-reaching and encompasses any sector within which raw materials are manufactured into finished goods - such as food, beverages, tobacco, breweries, leather, paper, and metal product industries - is faced with crucial human rights risks such as child labour in manufacturing and the supply chain26. This sector also faces human rights risks in the form of poor workplace conditions in terms of worker health and safety, as well as low wages, product stewardship issues, unethical sourcing of raw materials, and the health and environmental hazards associated with raw material sourcing and manufacturing26.

Human rights violations are also present within Canada. A Canadian mining company came under fire when East African workers filed a human rights lawsuit against the corporation on the grounds of slavery, torture and forced labour. The courts ruled that the lawsuit could go forward and the corporation came to a settlement with the claimants. In January of 2018, the Canadian Government created a Canadian Ombudsperson for Responsible Enterprise (CORE). The purpose of this office is to investigate corporate accountability abroad, especially in the mining, garments, and oil and gas sectors28.

In addition to the general manufacturing sector, the agriculture and fisheries sectors is also a major representative of the consumer products industry, and unsustainable practices in this industry are responsible for health and safety risks to workers and nearby communities due to the use of chemicals, the working environment, and disease spread. These sectors are also majorly responsible for child labour - according to the United Nations International Labour Organization, 60% of child labour worldwide is in the agricultural sector - in addition to forced labour, forced resettlement of communities, often indigenous communities, and the environmental impact on local ecosystems and communities due to unsustainable harvesting practices such as overfishing and the leeching of fertilizers into freshwater, which causes eutrophication and lowered productivity of the freshwater resources29–31.

While these human rights risks are abundant in other financial sectors such as mining, forestry and logging, pharmaceuticals, power generation and services, there also exist other important human right issues, such as censorship and surveillance, influx and right violation of migrant workers, land encroachment, revenue misuse by the parties in charge, and violation of indigenous people’s rights, as examples26.

Child Labour is, perhaps arguably, the most urgent and crucial of these human rights risks associated with human consumption. The International Labour Organization (ILO) defines child labour as any work that “deprives children of their childhood, their potential and their dignity, and that is harmful to physical and mental development"29. Child labour may be hazardous to children due to poor working conditions. These poor working conditions could include factories or mines that are kept in unclean or toxic conditions, usage of hazardous and heavy equipment, and even exposure to physical, psychological or sexual abuse29. Article 3 of ILO Convention No. 182 defines some of the worst forms of child labour as those involving slavery and child trafficking, the use of children in illicit activities such as smuggling, and any work that harms the health, safety, or morals of the child in question30. Unfortunately, the consumer products industry is a major cause for the exploitation of children around the world, especially in countries without the laws and law enforcement necessary to protect children and their rights.

Due to its ability to be easily hidden, since the abusees can be kept silent and misinformed, child labour is far more prevalent and dangerous than most people can imagine. The latest global estimate - the 2017 Global Estimates of Child Labour report - by the ILO concluded that during 2016, 152 Million children were subjected to child labour every single day, of which, at least 73 Million were reported to be involved in hazardous work31. Given the exponential rate of population growth and lack of large-scale coordinated efforts to eliminate child labour since 2016, it is quite possible that these numbers are even higher in 2020. The ILO report further elaborated on regional breakdown of the prevalence of child labour. The results signified that child labour was most prevalent in Africa, with 19.6% of all children between the ages of 5 and 17 being employed under child labour, about half of those children being subjected to hazardous work31. Africa was followed by Asia and the Pacific, with 7.4% of children employed under child labour, then the Americas with 5.3%, Europe and Central Asia with 4.1%, and the Arab States had the lowest rate of child labour at 2.9%31. Furthermore, 48% of the children in child labour were between the ages of 5-11 years old, their young age and malleable minds allowing them to move undetected, therefore protecting the employers from harsh repercussions31. Not only that, but the vast majority of children that were exposed to child labour (70.9%), worked in the agricultural industry, followed by the services sector (17.2%) and then industry (11.9%)31.

Despite these horrific statistics on child labour, there is slight evidence of improvement. Between 2012 and 2016, for example, the numbers of children in child labour worldwide went down from around 168,000 to 152,00031. However, these numbers are still demonstrably high, when ideally child labour should be completely eradicated in this day and age. There is still so much work to be done. Perhaps the biggest responsibility lies with international and national government, as recommended by the ILO Minimum Age Convention of 197330, as well as employers, but consumers play a critical role in the continuation of child labour as well.

Many consumers may not understand the effect of their choices to support brands exploiting child labour, on children in distant parts of the world. Sustainable Life App is an exceptional resource in assessing the sustainability of a verified brand’s products by using its Respect for Human Rights as a crucial tenet of the platform’s 5 Factors for Sustainable Consumption, proving factual reports to consumers, allowing them to have easy access to products manufactured by verified brands that will help them mitigate their part in kindling child labour. 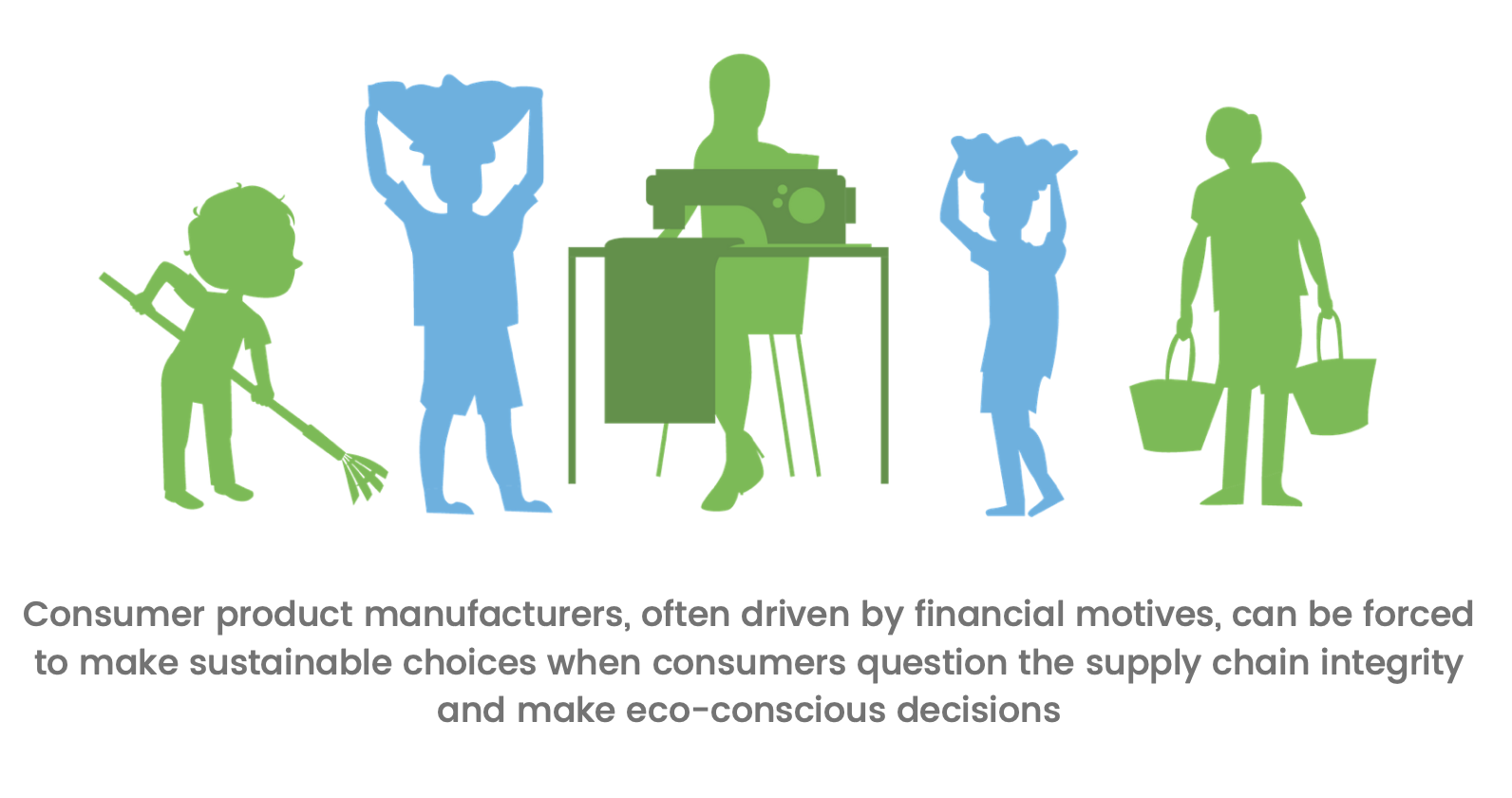 Child labour is just one of the many ways in which consumer products have an impact on human rights, a lot of these human rights risks fly under the radar. This ranges from underpaid farmers forced to follow corporate actions, to uninsured and disastrous labour conditions - consider the 2013 Dhaka garment factory collapse in Bangladesh, where 1,134 workers died, and thousands were grievously injured as a building housing warehouses for 5 major international garment brands collapsed32. This led to protests by labour advocates questioning the claims of consumer brands regarding protecting their workers, many of whom are overworked and underpaid. It is only when consumers question the integrity of the products they purchase, and make sustainable decisions, that financially driven motives of consumer product manufacturers are diverted towards sustainable choices that respect human rights.